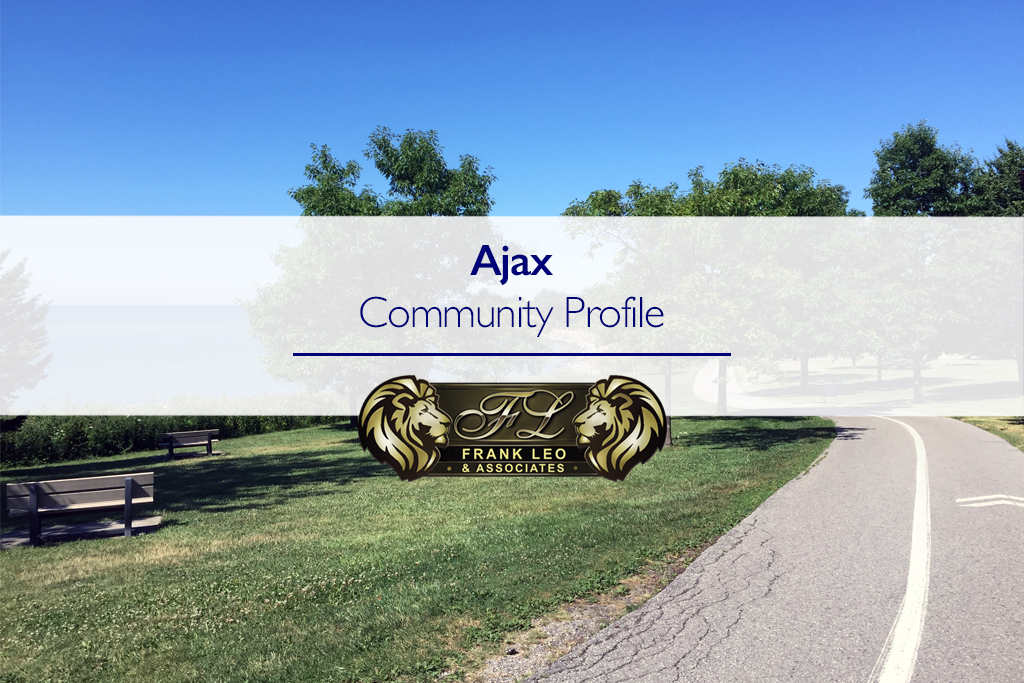 The Town of Ajax is a suburban community nestled between the City of Pickering and the Town of Whitby, offering a modern, well-planned community for GTA residents who want to avoid the bustle of urban living.

It has a great deal to offer its residents including quiet suburban living, spacious homes, abundant greenspace, all just a short commute from Toronto.

The History of Ajax

The town owes its inception to the Second World War. Prior to the war, the land that would transform into Ajax was forest and farmland in eastern Pickering Township. However, Defense Industries Limited (DIL) constructed a munitions plant in the area in 1941 in order to help with the war effort. Workers at the plant began to purchase land in the area and the beginnings of a town developed.

By the end of the war, the DIL munitions plant had produced millions of shells and employed over 9,000 people. People from all over Canada moved to Ajax to work at DIL. The land surrounding the DIL facilities were planned and developed into a comfortable community. This burgeoning town was expertly planned, with its own water treatment plant, sewage treatment plant, and school (with more than 600 students enrolled).

The town, built to serve the industrial needs of the war effort, was named in honour of a British ship involved in the first significant naval victory of the war, the Battle of the River Plate, where three British war ships, HMS Ajax, HMS Exeter, and HMS Achilles, routed a powerful German battleship, named the Admiral Graf Spee, near the Uruguayan capital, Montevideo.

After the war, the University of Toronto was inundated with former soldiers who were studying to become engineers. Meanwhile, the need to produce munitions at the DIL factory in Ajax ended with the war. The University took over the DIL plant and used it to house its engineering students, who retooled the facility into classrooms and laboratories. The university operated out of the former DIL site until 1949 and in those years more than 7000 students were trained as engineers there.

In the 1950s, the industrial base of Ajax migrated to elsewhere in Durham Region and the GTA, however the population of Ajax continued to swell, as new planned developments were built, expanding the original base of the town. People were attracted to the lakeside tranquility of a small town, which was not remote, but highly integrated into the surrounding region. By 1955, the people living in Ajax had established it as a distinct town, not part of Pickering, with its own town council and school board.

Only 13 kilometres from Toronto’s eastren edge, Ajax is home to over 100,000 people. As one of the most populated communities in Durham Region, Ajax is a modern and diverse community.

Ajax is a densely populated town bounded on the north by quiet rural farmland and forests, and on the south by Lake Ontario.

People from all over the world call Ajax home and the city has an especially large South Asian population.

Highway 401 travels through the centre of Ajax and the city spreads out to the north and to the south of the transit artery. The dense suburban neighbourhoods are all within a 10 minute drive to the 401.

The majority of houses in Ajax are single detached homes with four or more bedrooms. While four or more bedroom homes are the majority in Ajax, with 45% of homes fitting in this category, the second most popular kind of home are three bedroom homes. Most of these homes were built between 1960 and 2016. Ajax is full of relatively new and spacious houses ideal for growing families.

If you are interested in learning more about real estate in Ajax or browsing active listings, check the real estate listing and homes for sale in Ajax.

Just south of the 401, near the corner of Harwood and Bayly streets, there are several shopping centres including the Ajax Plaza, the Harwood Plaza, the Baywood Centre, and the Mackenzie Plaza.

North of the 401, at the corner of Salem and Kingston roads, there are several more shopping centres and big box stores, including the RioCan Durham Centre, the Business Plaza, the Canadian Tire Centre, and the Harwood Centre.

Shoppers can find a comfortable indoor mall shopping experience at the nearby Pickering Town Centre or the Oshawa Centre.

There is no shortage of recreation options in Ajax. Residents in the town can choose from an extensive gamut of both private and public recreation facilities.

The Ajax Community Centre is an establishment that is run by the town of Ajax. It features a gymnasium, squash courts, a swimming pool, and a skating rink. Additionally, the centre is the base for several community organizations including the Ajax Boxing Club, the Ajax Judo Club, the Ajax Skating Club, and the Rock Oasis Rock Climbing Facility.

The Audley Recreation Centre is a modern, state of the art community centre located in the north-eastren section of Ajax. It features a variety of amenities including a fully equipped gymnasium and a 25 metre lap pool with six lanes. Outside of the recreation centre there are tennis courts, a skateboard park, a splash pad, a playground, basketball courts, and walking paths. The Ajax Sportsplex is located next to the recreation centre. The Sportsplex was originally built for the 2015 PanAm Games as the official facility for baseball and softball. The facility’s 7 ball diamonds are now run by the town.

Beyond recreation centres, another entertainment venue in town is Ajax Downs and Casino. Ajax Downs is the only race track in Ontario where you can watch Quarter Horse Racing. With free admission and free parking, an afternoon watching horse racing can entertain the whole family. The Downs also hosts Canada Day celebrations, Craft Brewery Day, Family Fun Day, and, every Monday, the Ajax Downs Farmers Market. The site is also home to the Ajax Casino which brings visitors from all over the GTA.

For lovers of the outdoors, Ajax offers a wide choice of green spaces for hiking, biking, or general outdoor enjoyment. There are at least 38 kilometres of trails in Ajax and 93 parks that the municipality maintains, with two leash free dog parks.

In particular, the Greenwood Conservation Area, at 283 hectares, is among the largest parks in the town. It features walking paths and picnic areas. Another noteworthy greenspace is the Duffins Trail System, which offers 5 kilometres of trail that is perfect for bikes, strolls, and, in the winter, cross country skiing. Finally, the Ajax Waterfront is a local gem of a park, perched on the shore of Lake Ontario. The park is six kilometres of mixed maintained and natural parkland. A 7 kilometre trail crosses through the park. This trail is part of a system of trails that stretches from Hamilton to Belleville.

In Ajax there are 27 schools, 24 elementary schools and 3 high schools, conveniently located throughout the city. They are administered by the Durham District School Board. The school board offers French immersion at several of the schools.

The Durham Catholic District School Board administers 13 schools in Ajax, 3 secondary and 10 elementary. The school board also offers French immersion at 3 of the schools in Ajax.

Getting Around in Ajax

Ajax is highly connected to the rest of the Greater Toronto Area, along with Kawartha Lakes, Simcoe County, Northumberland County, and Peterborough County.

The town’s suburban nature lends itself to road transportation, however Ajax provides its residents with many alternatives, in the form of Durham Regional Transit and GO Transit.

Owing to its proximity to Toronto, many of the people who live in Ajax commute into the city for work. The majority of these commuters drive their own vehicle to work, reporting that leaving between 7:00am and 8:00am gives them enough time to get to work. Commuters also report that they are predominantly heading out of the region and commuting for more than 60 minutes.

The main travel thoroughfare in Ajax is highway 401. The highway is the main transportation route in Ontario and the most traveled road in the Windsor-Quebec City Corridor.

Durham Region Transit is one of Ontario’s largest public transportation systems. Formed in 2006 when the municipal transit systems of Pickering, Ajax, Oshawa, Whitby, and Clarington were amalgamated into one system. Durham Region Transit now services a much larger area than any of these smaller systems did. Residents in Ajax can ride DRT throughout Durham Region to each of the communities that make up the region (Pickering, Ajax, Whitby, Clarington, Oshawa, Scugog, Uxbridge, and Brock). The DRT operates more than 200 vehicles, servicing nearly 3000 stops in the region. The system also features many interregional connections, which can get riders to different parts of Toronto, the GTA, as well as neighbouring regions.

The Ajax GO train station is a hub stop for many DRT bus routes. From this connection, Ajax residents can take the GO train into Union Station, where connections to the TTC, Via Rail, and the UP Express are available. The GO train can also be ridden to Oshawa where Via Rail connections can be made, or to the Whitby GO station, where intercity Coach Canada and Megabus buses can be caught.

Questions About Real Estate in Ajax

Thinking of buying or selling property in Ajax or in the GTA? Frank Leo & Associates are here to answer your questions based on 30 years of experience in the Toronto real estate business.

We offer our expertise, honed over 30 years of experience in real estate in the GTA. Simply contact us or call (416) 917-5466 to get advice, or claim your free home evaluation if you’re thinking of selling.